Mr. Trump complimented them for their support of sodomy and sodomites… 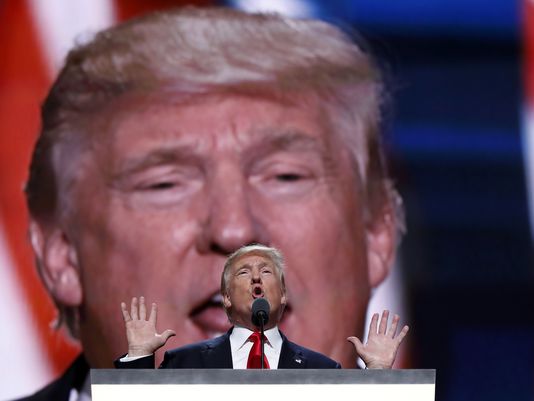 The two moral issues that will destroy us are abortion and sexual perversion. Mr. Trump, who has flip-flopped on abortion several times, did not mention abortion. That is not his issue and whatever he thinks personally, it is not a battle that he will fight. On sexual perversion he promised to protect the LGBTQ community. When he did so, the conventioneers cheered and Mr. Trump complimented them for their support of sodomy and sodomites.

This was an “I” speech, as opposed to a “we” speech. “I alone” was a common phrase. Obama has laid the groundwork, ruling alone by Presidential Decree. It seemed obvious to me that Trump intends on governing in the same manner, even if his goals are different. I do not imagine that Mr. Trump will pay much attention to Congress, unless he can control and manipulate it. Love him or hate him, Mr. Trump is openly and unabashedly narcissistic.

The Donald spoke of his gratefulness for the support of the Evangelical Community, admitting the obvious fact that he does not deserve their support. If he did make one really good promise, it was to work to undo the political restriction in the 501c3 act that keeps preachers from sharing their political views from the pulpit. Notably, where as with other issues Mr. Trump took on the “I am Your Man, I will change it and I will change it fast” attitude, when it came to the 501c3 issue he only promised to “work on it.”

My overall impression is that Donald Trump will make a fine Rightwing Dictator. If he is elected, and I do see that as a possible scenario, he will lift up the Nation with Babylonian pride, leading to the single hour destruction promised in Scripture.

In a comment to another article, someone suggested that Scripture calls even Nebuchadnezzar a servant of God. I confess that it does.

Jeremiah 43:10 says, “This is what the LORD of Hosts, the God of Israel, says: I will send for My servant Nebuchadnezzar king of Babylon, and I will place his throne on these stones that I have embedded, and he will pitch his pavilion over them.”

Nebuchadnezzar sacked Jerusalem, burned it to the ground, killed three quarters of the population, destroyed God’s Temple, stole all of the utensils, killed the priests and prophets and force-marched the survivors across more than five hundred miles of desert to Babylon, where they spent seventy years in bondage. If Donald Trump is God’s servant, I would expect exactly the same kind of behavior and the same kind of results in the United States.

After the speech, before I went to bed last night, I wrote these words on my Facebook page, but they really belong here:

From whence cometh this doctrine of demons, this grand delusion, this blind stupid hope that God Almighty is going to send a pagan king to rescue a pagan, evil and unrepentant people and their land? Does no one have a grip on reality? Do all Americans believe that God sits on a Red, White and Blue Throne? Is the church so apostate that it believes that God will overlook the slaughter of a million babies a year? Do none realize that their blood is being poured out to Baal? Is the church convinced that God now overlooks the sins of Sodom? At the end of this day, I am left with too many questions and not enough answers.

The watchman is blowing his trumpet and shouting the alarm with all his might. The Church turns up the music and writhes to a pagan beat… The louder the alarm is sounded the louder the music…

From the top of the wall, the watchman sees death and destruction at the gate. In the other direction he sees Christians in blindfolds, their fingers in their ears, writhing to the music and shouting Na, na na na na, at the top of their lungs.

One thought on “ON TRUMPS SPEECH”