The Antichrist will be the “Son of Satan” in much the same way that Jesus was the “Son of God” on earth. 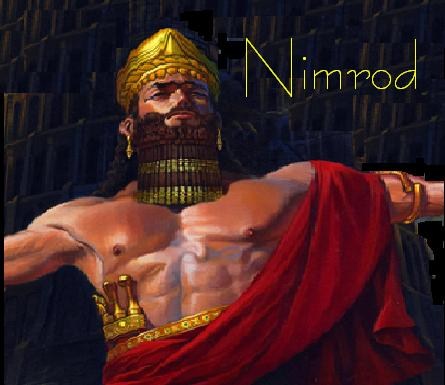 Nimrod was the seed of Satan, the first Gibbor, Half human, half Devil. When he died, his soul was assigned to the pit or the abyss.

4 The Nephilim were on the earth both in those days and afterward, when the sons of God came to the daughters of mankind, who bore children to them. They were the powerful men (Strong’s 1368. Gibbor) of old, the famous men.

NOTE: The Gibborum are the descendants of the Nephilim.

NOTE: Nimrod was a Gibbor. (Singular of the plural, Gibborum.)

At one time the whole earth had the same language and vocabulary. 2 As people migrated from the east, they found a valley in the land of Shinar and settled there. 3 They said to each other, “Come, let us make oven-fired bricks.” They used brick for stone and asphalt for mortar. 4 And they said, “Come, let us build ourselves a city and a tower with its top in the sky. Let us make a name for ourselves; otherwise, we will be scattered over the face of the whole earth.”

NOTE: The idea here is that of a Star Gate, not literally a tower that would reach the sky but a Temple that would allow illicit entrance into Heaven…

4 you will sing this song of contempt about the king of Babylon (Nimrod) and say:

12 Shining morning star (Lucifer)
how you have fallen from the heavens!
You destroyer of nations,
you have been cut down to the ground.
13 You said to yourself:
“I will ascend to the heavens;
I will set up my throne
above the stars of God.
I will sit on the mount of the gods’ assembly,
in the remotest parts of the North.
14 I will ascend above the highest clouds;
I will make myself like the Most High.”
15 But you will be brought down to Sheol
into the deepest regions of the Pit.

This argument is not original with me and it has its skeptics. I believe that it is true. I believe that Nimrod is a disembodied spirit, confined in the Abyss but that he will escape and, being incarnate in the body of a man, will be the Antichrist. The eighth king, but one of the seven. The “One who was, is not, and is to come. (as opposed to the One who was, is and is to come.)

Satan continues to mimic his Creator. Nimrod is Satan’s seed as opposed to Jesus, who is the seed of the woman. (Genesis 3:15) The Antichrist will be the “Son of Satan” in much the same way that Jesus was the “Son of God” on earth. In spirit he will be Lucifer resurrected. There will also be a fake resurrection of the body that he uses.

Interesting note: In the Egyptian religion, Osiris (Nimrod) was wounded on the right side of his head and his body cut in fourteen pieces by the evil Set. (See Revelation 13:3)