“Jacob I loved, but Esau I hated.” 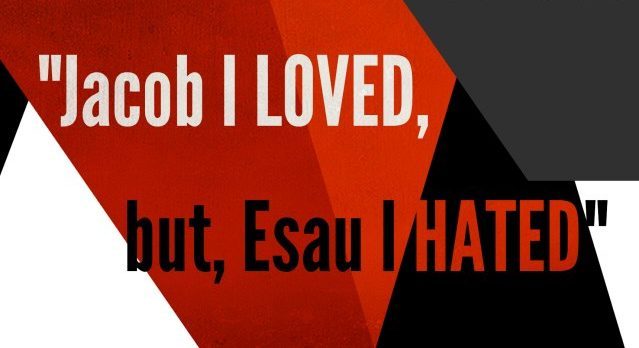 Romans 9:11 though they were not yet born and had done nothing either good or bad—in order that God’s purpose of election might continue, not because of works but because of him who calls— 12 she was told, “The older will serve the younger.” 13 As it is written, “Jacob I loved, but Esau I hated.”

Based on Romans nine, his interpretation of John 3:16 becomes so convoluted as to be hilarious… The word “world” refers only to the predestined Elect. “Whosoever” applies only to a tiny group of the Elect. “Believes” is not the result of a choice but rather a forced response over which the Elect “believer” has no choice. 2 Peter 3:9 says, “The Lord is not slow to fulfill his promise as some count slowness, but is patient toward you, not wishing that any should perish, but that all should reach repentance.” Calvin, based on his belief that Romans 9 is the focal point of all Scripture, insisted that both the word “all” and the word “any” in that passage must be limited to the Elect and that we must understand it to mean “…not wishing that any of the Elect should perish, but that all of the Elect should reach repentance.”

Arminius, on the other hand, believed Romans nine to be in error and believed that it should not be included in Scripture. But it is in Scripture and it must be dealt with…

Most Christians have rejected the views of both Calvin and Arminius, deeming both doctrinal systems to be heretical. So, what do we, as Christians, do with Romans nine?

First, I must insist that Romans nine must be interpreted in the light and context of the rest of the Scripture and not the other way around. When you find a difficult passage, you do not use that passage to warp, twist and bend clear and plain Scripture. You must explain the difficult and obscure in the context of the clear and the plain. To force John 3:16, 2 Peter 3:9 and a hundred other clear and plain Scriptures to agree with Romans nine is backwards. To redefine words like world, all, whosoever, any and none in order to make the Scripture agree with your perceived “Key Passage” is a clear indication of ignorance and mental instability.

Understood in the light of Romans 8:29, Romans chapter nine makes perfect sense and does not disagree with any other Scriptures… In other words, by allowing plain Scripture to interpret the difficult, the Bible becomes a straightforward and clear record. Understood in the light of Romans 8:29, a very clear passage, you can understand Romans nine in a way that does not require you to redefine simple words and twist Scripture.

Yes, God loved Jacob and hated Esau. But that love and that hate were not simply the result of a random choice, devoid of any reason. When you understand that God knew, absolutely knew the DNA, the character, the personality of both men and could predict, infallibly, the actions both men would take under the same circumstances, along with how their descendants would act, it makes sense. God knew both men, inside and out, before they were born and God decided to love one and hate the other, based on that knowledge. If you follow the descendants of both men and compare the Israelites with the Edomites, you will see that God did indeed make a wise decision.

That choice was real. God calls all men, not desiring that any should perish but that all should come to repentance… That call is real. With the call comes the faith and power to believe. The choice is real, and God respects that choice… When Jesus said, ““For God so loved the world, that he gave his only Son, that whoever believes in him should not perish but have eternal life.” He meant “the world” in the most common sense of the word. He meant “whosoever” in the most common sense of the word. “Believes” is the result of a clear and plain choice. God predestines those whom He foreknew would accept him to be conformed to the image of Christ. Nothing would indicate that God predestines some to Heaven and others to Hell based on a random and mindless choice.

When God says that it is his will that none should perish, but that all should reach repentance, He means that in the simplest and most straightforward way, “none” means “none” and “all” means all. But God has given men the power to choose and that includes the right to reject him. This is consistent with all of Scripture. Even the angels have free will. When Lucifer rebelled, God let him go. One third of the angels chose to go with Satan, two thirds choose to stay with God. God honored their choice. When Jesus called the Rich Young Ruler, he walked away… Jesus let him go and honored his choice…

Romans nine, understood in the light of the whole of Scripture, does not oppose that. It is Calvin’s interpretation of Romans nine that opposes and contradicts the Scriptures, not Romans nine as it is written.