The strict Calvinists will choose to reject this, and the Arminians are predestined to reject it. Good old fashioned, Born Again Children of the Living God will understand… 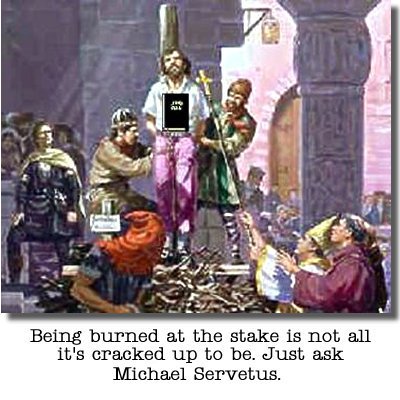 That is like the super scientist who cannot find a wife to his liking and so he creates the most beautiful robot in the world. She does everything he asks her to do and follows him around telling him how wonderful he is and how much she loves him. The only problem is, as her programmer, he can never believe her. He is constantly aware that she is there because he placed her there and that for all her “I love you” phrases, she is only saying what he programmed her to say.

On the other hand, the man with an imperfect wife who is sometimes moody and argumentative, can fully believe his wife when she says she loves him. She is there of her own free will and she is free to say whatever she chooses to say. That is the entire purpose behind free will.

God gives men Free Will and a real choice to accept or reject him. In Heaven, God will be eternally surrounded by Angels who given the choice to side with Lucifer, chose to stay with God and men and women who having had a real choice, chose him and his way. When these men and angels sing his praises, He will be able to fully believe every word they say…

That is why Calvin was wrong. Men and women always have the freedom, just like Adam and Eve, to reject God when He calls.

If your God cannot deal with Free Will and still control the outcome of his plans, if your God must control everything, forcing himself on those He chooses and never calling those He rejects in order to accomplish his will, your God is too small.

You may hate this but I either choose to believe it or God predestined me to believe it, depending on your point of view, but both Arminianism and five-point Calvinism are heresy. The truth is neither at the South Pole nor at the North Pole; it is found at the Equator. There is a key to every conundrum in Scripture and this debate has a key.

For those He foreknew He also predestined to be conformed to the image of His Son, so that He would be the firstborn among many brothers. (Romans 8:29)

The strict Calvinists will choose to reject this, and the Armenians are predestined to reject it. Good old fashioned, Born Again Children of the Living God will understand…

2 thoughts on “WHY CALVIN WAS WRONG”