“There is a religious institution whose members are the most devout and serious of any faith on earth. Those who are a part of this institution unquestionably believe in a god that directs their activities and they look to this deity with the ultimate hope of gaining his favor. They, unlike many of the people ascribed to the popular religions of today, have no doubt… 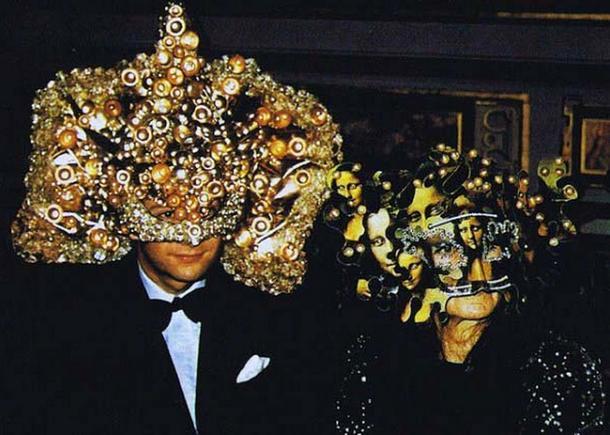 The photograph was taken at a dinner party, thrown by the Rothschilds, in 1972.

One of the most powerful quotes I have ever read comes from “THE LABYRINTH” by Mark Flynn:

“There is a religious institution whose members are the most devout and serious of any faith on earth. Those who are a part of this institution unquestionably believe in a god that directs their activities and they look to this deity with the ultimate hope of gaining his favor. They, unlike many of the people ascribed to the popular religions of today, have no doubt that their god lives and interacts with them. They see the favor their god bestows upon them. The riches and power gained through their piety actively demonstrates the reality of their god’s existence. The precepts of their secretive religion are contra to that of the Judeo-Christian religion that values above all, love for their fellow man. They consider the people outside of their group inferior creatures, unworthy of their god, but necessary for manipulation towards the completion of their final objective. Through devotion, submission to the will of their god, and dedication to his secretive plan, they believe that they will achieve immortality and live in a coming golden age where their god will appear on earth and rule them in a new paradise of his design.”

The “Gospel” of the Illuminati is the ancient GNOSTIC Mysticism. The real Gospel is Good News… the Gnostic story, not so much… this is from a Gnostic site.

“Just as Adam and Eve are regarded as central characters in the Christian creation myth, they are equally as important in that of the Gnostics. As mentioned in previous articles, the creation of the world according to Gnostic tradition is an account of the world created not by the True God, but by a false god. As Adam and Eve were created and placed in the Garden of Eden in Genesis, the same has been done in Gnostic scripture.

“However, the demiurge is responsible for the placement of Adam and Eve in the Garden of Eden. The demiurge has created the fleshly bodies to entrap the spirits of Adam and Eve. Adam is placed under a spell of ignorance and put to sleep by the false god. Eve is placed next to him, and she commands Adam to awaken. When Adam sees Eve, he believes that she is his creator.

“The demiurge wanted to keep Adam and Eve ignorant; forever worshiping him. The Gnostics believe that the demiurge was posing as the false god, thus keeping Adam and Eve under his spell of ignorance. As long as Adam and Eve believed that he was the only god, they would worship him forever.

“The serpent is regarded as an evil figure in traditional Christian stories, but to the Gnostics, the serpent is the hero! The Gnostic text teaches that as the demiurge tells Adam and Eve that they may help themselves to anything the Garden, they are to stay away from the Tree of Knowledge. As Adam and Eve listen to the serpent, their eyes are opened, and the spell of ignorance is broken forever. Because they chose to listen to the serpent, Adam and Eve no longer worship the demiurge, but recognize that there is the True God, and he was not the creator of the evil, imperfect, material world.

“Adam and Eve gave birth to two children, Seth and Norea. The descendants of Seth regard themselves as Sethians, those that have been blessed with the gnosis.”

Eve, according to the satanic version, became a completely new creature after she ate the fruit of the Tree of the Knowledge of good and evil. Because she recreated herself by an act of her own will, she is seen as virgin born. All of the ancient goddesses and the Catholic, Mary the Mother of God, are virgin born. They represent the self-created Eve. There is always a serpent god who represents Lucifer, unfairly judged and punished… once beautiful, now damaged goods. There is always a bull or a cow god who represents Jehovah. The serpent god, in every ancient pagan religion, kills the bull or the cow. Adam is strangely missing except as represented in the common man. The unholy trinity is a self-created goddess, a serpent god and a bull… all of mythology, renaming the characters a thousand times, revolves around these three.

The symbolism is everywhere. Take a bullfight in Spain or Mexico. The brightly clothed Matador (killer) represents Lucifer. The bull represents the much larger, bully God who tried to keep Adam and Eve as ignorant slaves and unfairly judged Lucifer. The much smaller, Lucifer is much smarter and through superior knowledge kills the bull. The snake always wins in the end.

All of the ancient, pagan religions and the Gnostic or secret knowledge of the secret societies… including Freemasonry hold that Apollo / Nimrod is going to return and rule the earth in a New World Order. Scripture supports that idea and the idea that the Nephilim return. Something supernatural is about to happen. This is the religion of the Illuminati.

Masons below the thirtieth degree do not know this. Only the leadership in the Mormon Church is aware… the College of Cardinals and the Pope are certainly aware but your average priest hasn’t got a clue. Those in the Watchtower group in New York are fully aware but your average Jehovah’s Witness has no idea. This is a religion of the elite. This is knowledge reserved for the few… the select.  All of these groups are preparing the common man for the coming of a glorious New World Order led by a supernatural, messianic figure.

The Roman Catholic Church is preparing to greet an “Alien Messiah” who will lead the whole world to accept a single religion. Jehovah’s Witnesses are looking for the Messiah to return and lead them into a new Garden of Eden… a paradise on Earth. Mormons believe that the best of them will become gods like Jehovah and, like Adam and Eve, be sent off to populate and rule their own planet but according to their “White Horse Prophecy”, at a time when the US Constitution is in deep trouble, a Mormon will come to the rescue and lead the whole world back to paradise. Much has been said and written about Mitt Romney and his friend’s sincere belief that he is that man.

Something supernatural is about to happen. The world will be lead into the greatest period of chaos and death in history. At the bottom… the very worst, a hero will ride in to save the day. That hero may be a man or he may be a demonic “Alien”. But a messiah is coming and the whole world is waiting with baited breath. The deception is going to be complete. Carnal Christians are going to jump on board with great enthusiasm. The only exception will be the Elect of God and we will quickly become the world’s most hated minority.