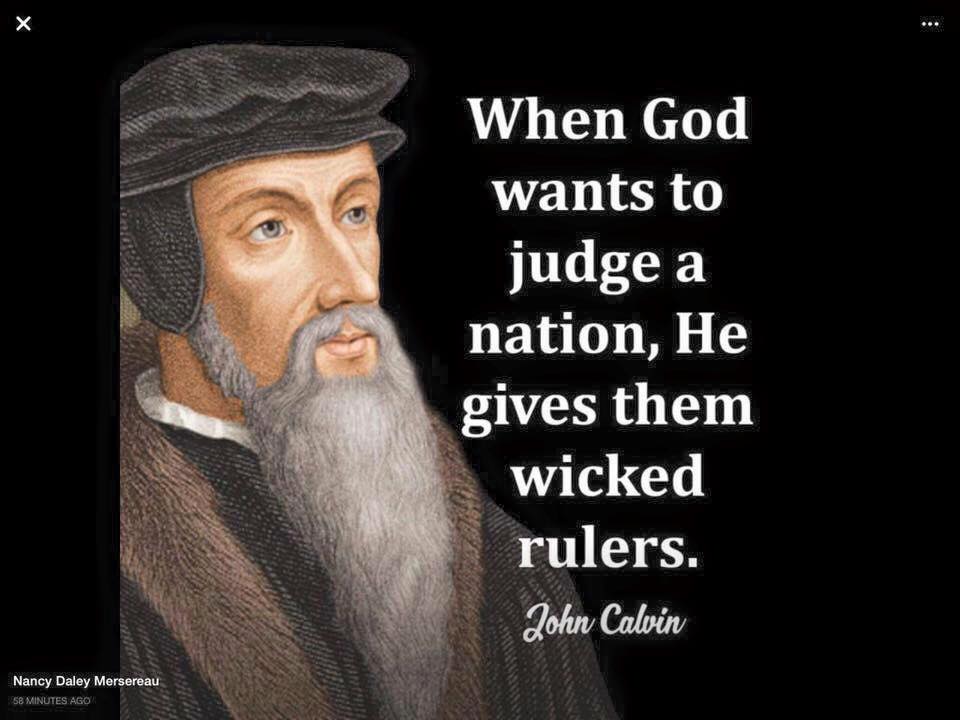 John Calvin said that, “When God wants to judge a nation, He gives them wicked rulers.” I agree with that… God even let us choose our own wicked ruler… (That thought would drive Calvinists crazy.)

God gave John Calvin to the Church so that he could burn Michael Servetus at the stake!

Calvin agreed with William Shakespeare, “All the world’s a stage, and all the men and women merely players: they have their exits and their entrances…” He believed that we were merely scripted actors, playing the part written for us by Almighty God. Not only did God decide whether to send a person to Heaven or Hell before they were born, He designed and chose the shirt they would be wearing the day Calvin tied them to the stake… Calvin believed that Calvin was predestined to be right and everyone else was predestined to be wrong. Those who agreed with Calvin were predestined to be right and go to Heaven. Those who disagreed with Calvin, were, he believed, predestined to be wrong and go to Hell… Amazing how God wrote the play with Calvin in the middle… the standard by which all things are judged.

I remember a story of the Ministerial Association meeting where they were arguing about predestination and free will. It got so hot that they divided into two groups and moved to opposite sides of the room. This poor Pastor arrived late, and finding two groups, he approached the first group and asked, “May I join you?” One of the men in the group came back, “Why do you want to join us?” He replied “You are the first group and there is an empty chair here.” “No!” the group spokesperson said, you cannot join us unless you were sent! Go over there, they will take you.” Going over to the second group, this poor Pastor asked, “May I join you?” “Why are you here?’ the spokesperson for the second group asked. “Because they sent me.” He replied. “No, you cannot join us” the spokesperson replied, “unless you came of your own free will!”

When I told a Calvinist that I believed in limited free will, he came back, “You can’t prove that and don’t give me any crap about predestination being based on foreknowledge!”

He didn’t want to hear that because it is the Scriptural answer to Calvinism and they have no argument against it beyond “Don’t tell me that!”

Of course Free Will is limited. You cannot will yourself to sprout wings and fly, you cannot will the circumstances of your birth and you cannot will yourself to live to the age of one hundred and thirty. You can, however, choose to accept or reject the Gospel of Jesus Christ and that decision will determine much of the circumstance of your life on earth and it will determine your eternal destiny. So, what is the answer to the cruelty and harshness of Calvinism. How do we know that Calvin choose to have Michael Servetus burned at the stake and that he was not scripted to do so, by God, apart from his own free will?

Romans 8:29 For those He foreknew He also predestined to be conformed to the image of His Son, so that He would be the firstborn among many brothers.

“THOSE HE FOREKNEW HE ALSO PREDESTINED”

God did not create mindless robots, programmed to act out a play for his entertainment. God created men with a free will. God also knew everything from the beginning, including who would accept him and who would reject him. Based on that knowledge, God predestined those who would accept and embrace him, to be conformed to his image. God knew, before the foundation of the world, that we would love him. He has predestined us to be like Jesus…

There is a key to every problem, somewhere in Scripture. Balancing Free Will with Predestination can be challenging and difficult. God, who understood that, gave us the key to understanding. Calvin was not predestined to be right. Others were not predestined to be wrong. Calvin, of his own free will, decided to murder a man for the crime of disagreeing with his private interpretation of Scripture. Calvin is not a hero; he is a murderer. Calvin, though not wrong on every issue, was not right in everything; he was a heretic who used the idea of predestination to defend and support his own sin.

There are Calvinists today who would burn me at the stake for the crime of offending their champion. Calvin still has a way of attracting hard headed and arrogant followers. It is very handy to blame your own sin on the God you believe wrote it into the script and forced you to sin…

You are free to accept this article or to reject it. You cannot blame God…