I believe that, as Cyrus defeated the enemies of Israel, Trump will do the same. As Trump has recognized Jerusalem as the Capital of Israel and moved our Embassy within her walls, so he will build their Temple… 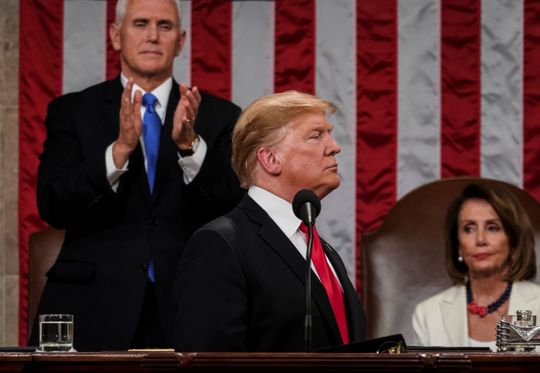 If I had watched Trump’s speech ten years ago, I would have cried and applauded from beginning to end. What a speech! But this isn’t ten years ago, and I watched it through eyes backed by knowledge, wisdom, prayer and much forethought. What I saw was not what I would have seen.

Let me share my thoughts:
1. They kept putting the camera on Jared Kushner. Something shook my spirit as I watched him and something just screamed in my head, “You are looking at the New King of Israel and the Man of Sin.” He did look like the Antichrist from Hollywood.
2. As Trump went through the section on Israel and introduced person after person connected to the Holocaust, and the victims of Antisemitism, a thought came to me… This is Cyrus!
3. As he spoke of taking down treaties and outdoing the world in nuclear missiles, I thought how Cyrus conquered Babylon, sent the Jews home, and built the Temple.

When the sudden end shall come to Babylon, we shall be at the top of the world. Although it may be indirectly and other nations retain their sovereignty, we shall dictate the affairs of all the nations of the world. We must become more powerful before we fall. There are things we must to do and accomplish first. One of those things that we as Babylon, and Trump as Cyrus, must do is to defeat the enemies of Israel. We must build her Temple and we must install her king. The speech last night was made by the man who shall lead us to a greatness we have never known. The man in the Nation’s Pulpit is the one who will accomplish these things.

I believe that Trump will defeat the liberals and hang their leaders. He will build the wall. Trump will make treaties that increase our national wealth beyond all imagination, he will stop our internal feuding and unite us as a people. The President will be the pendulum in the Hegelian swing that brings the nation to the far right corner of political reality.

I believe that, as Cyrus defeated the enemies of Israel, Trump will do the same. As Trump has recognized Jerusalem as the Capital of Israel and moved our Embassy within her walls, so he will build their Temple… It will be built in exactly the spot in which the first two stood and the Holy of Holies will sit on the Foundation Stone of the World.

I believe that Trump will install Jared Kushner as Israel’s King and that King Jared will someday rule the world from Jerusalem.

As much as they sometimes seem to clash, I believe that Trump and Pope Francis need each other. The Pope is calling the religions of the world to regress to the worship of Isis and the Pagan Pantheon. Somehow, the Vatican will attain its 1,800-year-old goal of ruling in Jerusalem. If Trump is Cyrus and Kushner is the Man of Sin, Pope Francis is the False Prophet… You have, in these three, the unholy trinity of the Beast. You have Trump as the Military Power, Jared as the Son of David, returned from Babylon to rule in Jerusalem, and you have Pope Francis, High Priest of Isis and unifier of the world’s religions.

Really, all we need now is an assassination, a resurrection and a visitation from Isis (Likely appearing as Mary, Queen of Heaven and Mother of God.) It would not hurt to have a visitation and a full disclosure of the “Aliens who created us.” If “Mary” was the leader of that group and the “Mother of us all” That would complete the picture.

Then, when we are on top of the world, the enemies of Israel have been destroyed, Israel has expanded to her God assigned borders, there is a Temple in Israel and a King on the throne in Jerusalem, America will be destroyed in a single hour. Then, we will sit in darkness and silence. In that day, the merchants of the world will weep, our enemies will fear to take possession of the land for fear of her radiation-induced plagues, and we will no longer be known as the Queen of Nations.

In that day, a King will rule the world from his throne in a Royal Palace built on the hills of Jerusalem…

All this I saw, as I watched the State of the Union Address of 2019…

Again, I could be wrong. I make no claim of speaking for God but I must share what I have seen with my heart and witnessed with my spirit…

Get right with God now. There is so little time…

One Hundred Sixty things to study, think and pray about…