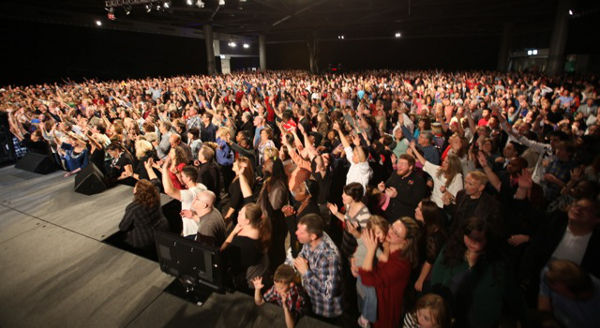 The next great revival will be in the FEMA Camps, somewhere between the barracks and the guillotine.

I wrote those words a year or so ago. I just received and started reading the new book, The Final Roman Emperor, The Islamic Antichrist, and The Vatican’s Last Crusade, by Tom Horn and Cris Putnam. Towards the end of the first chapter, they predict a fourth Great Awakening.

I am not certain that it will work out exactly as they have imagined it, but there is one thing that really caught my attention; this great awakening will follow tragedy. The United States, they believe, will be attacked by ISIS, with a weapon of mass destruction, perhaps EMP that takes out both people and infrastructure. The United States will descend into anarchy and become a police state. The common man will be robbed of communications, internet, cell phones, and, to a great extent, electricity and the basic necessities of life. It will be out of that desperate situation that revival will be birthed.

I agree. If there is to be a Great Awakening, it will be birthed in the midst of great pain and human suffering of an unprecedented nature.

If, and I still insist on the word “if”, there is to be a fourth Great Awakening, not only in America but worldwide, it will be accompanied and opposed by a United, One World, false religion called “Christianity”. It will also be opposed by Islam and the pagan government. Perhaps millions will be brought to salvation, through a Biblical conversion involving repentance and the rejection of sin.

To accept Christ, in this Great Awakening, will be to make oneself an instant target and many will die cruel deaths and suffer much as the Devil fights his last desperate battle. It will be the “Christians” in the false church who form the greatest danger to the Born Again child of God. The greatest spiritual challenge will be resisting the invitation to join the accepted and protected church… the church that follows a fuzzy, lovable Jesus who requires nothing and saves everybody, offering a Grace that accepts and encourages sinful lifestyles…

I am not certain, but I suspect that the thing that will be celebrated as a “Fourth Great Awakening” will be a false awakening… an unscriptural, Bibleless, Unified Church, that rises up to “fight Islam”. A church without doctrine or authority, a church of the “Warm, Fuzzy Jesus, where Protestant and Catholic alike worship Mary, pray to Saint Peter, and look to the Pope for spiritual leadership.

Any real revival, any revival that leads to repentance and commitment to the God of the Bible, will be marginalized and persecuted; both leaders and converts will be imprisoned and martyred.

Revelation 13:7 And he was permitted to wage war against the saints and to conquer them. He was also given authority over every tribe, people, language, and nation.

That is my take… What do you think?