They were stoning Stephen as he called out: “Lord Jesus, receive my spirit!” Then he knelt down and cried out with a loud voice, “Lord, do not charge them with this sin!” And saying this, he fell asleep. 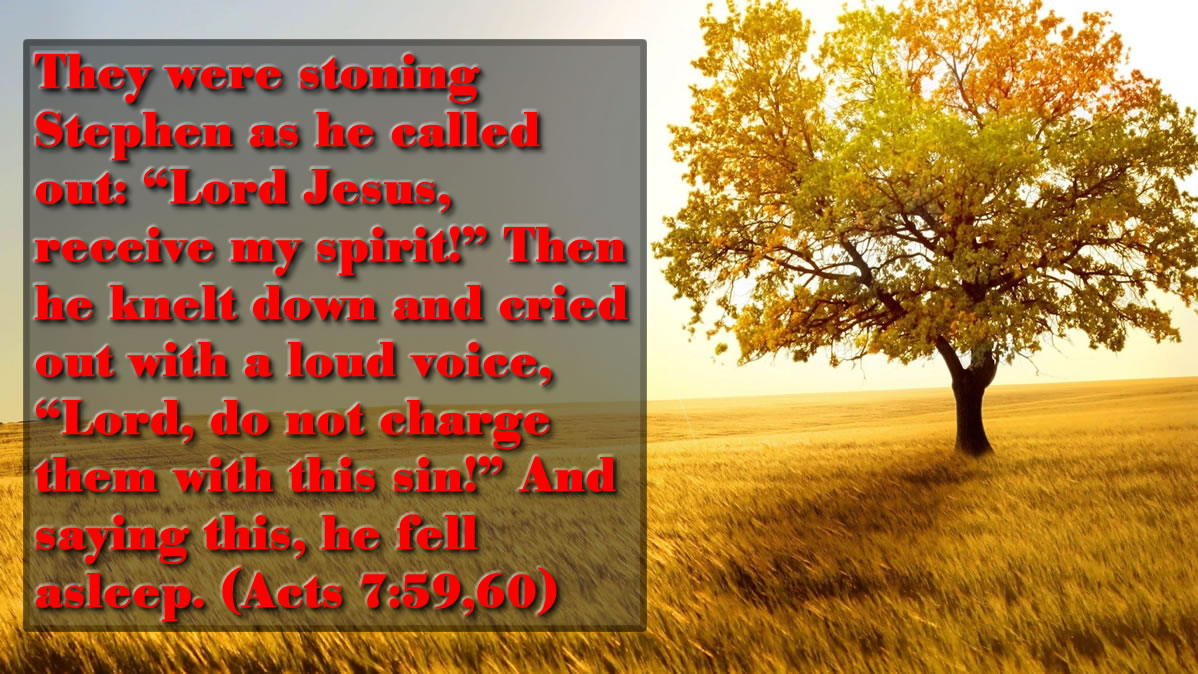 I am not frightened nor is anyone I know who believes in a mid-trib or post-trib rapture.

I am excited… we are excited. We have full faith in God that He will be with us and in us through whatever happens:
• He will fully protect us from tribulation when He finds that to be useful to the cause.
• If we suffer hunger, thirst or deprivation, He will be with us… strengthening us and empowering us.
• If we are to die, He will be with us and we will die with utter and unshakable peace in our hearts and minds… and we will go on to great glory with him.
• There is a special place in Heaven for those who lose their heads for the Gospel.

When God called Paul, He said:

“But everything that was a gain to me, I have considered to be a loss because of Christ. More than that, I also consider everything to be a loss in view of the surpassing value of knowing Christ Jesus my Lord. Because of Him I have suffered the loss of all things and consider them filth, so that I may gain Christ and be found in Him, not having a righteousness of my own from the law, but one that is through faith in Christ—the righteousness from God based on faith. My goal is to know Him and the power of His resurrection and the fellowship of His sufferings,
BEING CONFORMED TO HIS DEATH,
assuming that I will somehow reach the resurrection from among the dead.” (Philippians 3:7-11)

Then I heard a loud voice in heaven say:

The salvation and the power
and the kingdom of our God
and the authority of His Messiah
have now come,
because the accuser of our brothers
has been thrown out:
the one who accuses them
before our God day and night.
They conquered him
by the blood of the Lamb
and by the word of their testimony,

THE GREEK WORD FOR Witness/Testify IS MARTYR. “This high commitment to witness/testify exemplified by Christ resulted in His persecution and death. Likewise, with His followers there would be persecution for their witness (John 15:20 ). Thus, early in the Book of Acts (Acts 7:1 ), Stephen became the first martyr. That very word comes from martureo and really states that Stephen was first and foremost a witness, giving testimony. Ironically, the witness was put to death by witnesses to his testimony ( Acts 7:58 ).

The death of Stephen serves as a stark reminder that true and faithful testimony to Christ requires total commitment, even one’s life.”

The first video to circulate on social media reported that some power, emanating from CERN, in Switzerland, has changed everything from the lines in movies to verses printed in old and well-worn Bibles around the world.

I have hesitated to write on the so called, “Mandela Effect” because I see it as both stupid and unbelievable. However, the videos produced and circulated on social media are highly professional and the deception is powerful. People who are my friends on Facebook are beginning to fall for the lie.

First of all, I have taught the Bible for a very long time. I have had long time Christians act in shock and denial when I told them that “Cleanliness is next to godliness” is not in the Bible. They are just sure that it is and remember reading it in their Bible. Unfortunately, it was Benjamin Franklin, not Jesus Christ who said that. The real effect that we are talking about here is the effect of misquotes that are repeated so often that they replace the original in the minds of a large percentage of the population.

The first video to circulate on social media reported that some power, emanating from CERN, in Switzerland, has changed everything from the lines in movies to verses printed in old and well-worn Bibles around the world. This is a very obvious lie, but the Psy-Ops Officer, down at CIA Headquarters in Maryland, is very smart. He understands that many things, from lines in movies to verses in the Bible, have been misquoted so often that a large percentage of the population is convinced that the misquote is genuine.

What a deal… all you have to do is write a script and have one of your “Christian” operatives on YouTube / Facebook read it in convincing tones… as if she had discovered an awful and evil plot. You tell people that their belief in a misquote is genuine. (People like to be told that they are right). Then, you play / show the original. You tell them that their memory is correct and keep reinforcing that their memory is correct. (they love you now) You keep playing / showing the original, correct version and insisting that it is wrong, it has been changed. (people love evil plots and mysteries). Then, you offer an implausible, impossible, crazy explanation… somehow, the evil folks at CERN have loosed a force that has changed movies and Bibles around the world.

I will tell you now… if such a force existed, (it doesn’t) it would change verses like John 3:16, not obscure passages in Isaiah. Such a malevolent force would not be used to change the lines in old Disney movies either, it would be used on much more important things.

The misquotes from the Bible are very common and often repeated. As a Bible teacher, I have already dealt with these misquotes many times. Congregations and Bible students are sometimes visibly upset when the preacher / teacher begins to teach on those verses. I know those verses, as they read in your Bible, are correct because I have dealt with them before… long before CERN was ever started.

Mark Twain was not a man I would quote on religion but he had a great degree of worldly wisdom. He said, “It is easier to fool a man than to convince him that he has been fooled.” The proof of that will be seen in how many people side with the Psy-Ops Officer down at the CIA and tell me that I am crazy.

They are playing with your mind… they want to shake your faith in God. After all, if the folks at CERN can change the words in your Bible, where is God? Relax. CERN is evil and evil things are happening in Switzerland. The Angel of the Pit is about to escape and CERN will most likely play a part in that. That said, they have not changed the words in your Bible. The CIA fellow who did this will burn in Hell if he doesn’t repent… Don’t let him take you along for the ride.