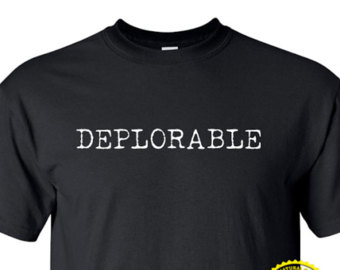 I am a Deplorable. Hillary said so and Facebook agrees. The other day I posted a video on Facebook that called out the Democrats. The video, summed up quickly, pointed out that the Party of Jim Crow and the KKK has traded in their whips and nooses for a carrot on a stick. Offering free stuff, it seems, is a far more powerful tool in controlling the masses. No matter how corrupt, ungodly, demonic or evil you may be, offering free stuff in exchange for votes will get you elected.

In my comment, I noted that their control has expanded to cover Caucasians with little money and no morals. It seems that the derogatory term I used to describe those people was more than the censors at Facebook could take and I was banned for three days. Oh well, If I wanted to use that term, I should have used it to describe Deplorables, no one would have had a problem with that…

Back to being deplorable… When Hillary used the word “Deplorable” to label me, and millions like me, she did not change me, nor did she change anyone else, she simply redefined the word. Whatever Deplorable meant before Hillary used it as a label, it instantly became an honorable title. Millions wore Tee-shirts that identified themselves as Deplorables. Tens of thousands rallied around the Deplorable flag in Washington D.C. Words do not define people of character, people of character define words.

So, what is a Deplorable?

You are welcome to add to my list, but you get my point…

And… No, I did not vote for Trump because I am of the strongest opinion that no Babylonian King is going to save America, in her sins, so that she can sin some more…