“God will be lawful in everything. Lucifer is the god of this world and God will allow him to run it…” 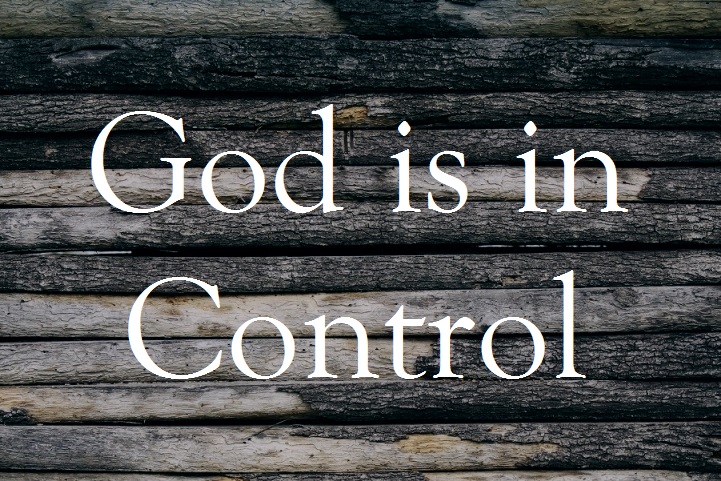 “But God is in control!” I cannot tell you how many times I have seen that comment under posts describing war, chaos and End-Times Prophecy. It seems, that for some, the idea that God is in control provides comfort in ignorance. Many seem to believe that they do not have to think or study because, “God is in Control.”

That brings two questions to mind:

Let us briefly consider the first question. Scripture tells us what to watch for and Jesus, repeatedly commanded us to watch. I believe that to choose ignorance is a sin. If Scripture tells us what to watch for and Jesus commands us to watch, not to watch is to live in sin and rebellion, daily disobeying the direct command of Jesus Christ. Let us assume, for a moment, that God really is in total control, micromanaging every detail of current events. Does that fact excuse those who refuse to watch? I do not think so. “God is in control,” is not an excuse for willful ignorance.

What about the second question, is God really in total control of everything? We need to look at that question from two different perspectives:

From an eternal perspective, the answer is certainly yes. God is outside of time. He sees the end from the beginning. When time comes to an end, everything will have turned out exactly as He planned in the eternal past, before He created time. God will have his way. Every prophecy of the Book will be fulfilled. In that sense, God is in control.

I am going to propose however, that most of what happens in the world, on a daily basis, is not under God’s control but rather, under control of Lucifer, who is, according to the Bible, “the god of this world.” On a local basis, some things are the result of demonic activity but most things that happen are a result of the sinful actions of sinful people.

Adam was the first “god of this world.” God gave Adam dominion over the world and everything in it. When Adam sinned, that title, and all the authority that goes with it, was given to the Nachash, Satan, the Devil, Lucifer or whatever you would call him. When Jesus came, the Devil took him to a high place and showed him all the Kingdoms of the earth. Satan offered those kingdoms, with all the riches and power associated with them, to Jesus, if Jesus would only bow down and worship him. Jesus, we know, refused the offer. What He did not do was to challenge the Devil’s legal authority or ability to carry through on his promise. Jesus accepted Lucifer as the rightful god of this world.

Matthew 4: 8 Again, the Devil took Him to a very high mountain and showed Him all the kingdoms of the world and their splendor. 9 And he said to Him, “I will give You all these things if You will fall down and worship me.”

If God was in control, in the way that many assume, Jesus would have called Satan’s bluff. Jesus would have laughed at the Devil… “My Father controls everything… You can’t do that!” But, for the moment, Satan does have that authority and he is, very much, in control.

God will be lawful in everything. Lucifer is the god of this world and God will allow him to run it. God wins in the end. God knows what the Devil is going to do and He has told us about it in his Word. We know, not only that God will win, but all the major events on the road to Armageddon. We are watching those events take place before our very eyes.

The thing that escapes those who use “God is in control” as an answer to every problem, is that Lucifer wins. The Devil gives power to the Beast and the Beast defeats the Church. We lose! On an earthly plain, we are the losers.

Daniel 7:21 “I kept looking, and that horn was waging war with the saints and overpowering them…”

Revelation 13:7 And he was permitted to wage war against the saints and to conquer them. He was also given authority over every tribe, people, language, and nation.

Of course, we go to Heaven and return with Jesus Christ when He defeats the forces of evil in the valley of Megiddo…

If God was in control, the Beast could not make war against the Saints or overcome them. Everything is not going to work out well. One Christian is being martyred for his faith every fifteen minutes… Today, all day long. The United States will be destroyed. American and British Christians are going to suffer, just like the saints in the Middle East are suffering today… God is not going to stop that. There is no exemption. “every tribe, people, language, and nation” means “every tribe, people, language, and nation.”

“God is in control” is not even true. God will win. God knows. God permits. But God is not in control… the Devil is in control. This is his world.

“God is in control” is not an excuse for ignorance, nor is it a bed under which you can hide. You need to learn what to watch for. You need to obey the command of your Savior and “Watch.” You need to prepare, both spiritually and physically for the chaos, the turmoil and the pain that is coming. You must be prepared to die.

You cannot hide but you can watch, you can be aware, you can prepare and you can make Heaven your home.