All of these signs, and too many more to list, are happening in the 69th year of the Generation that Jesus said would not pass away before the end. 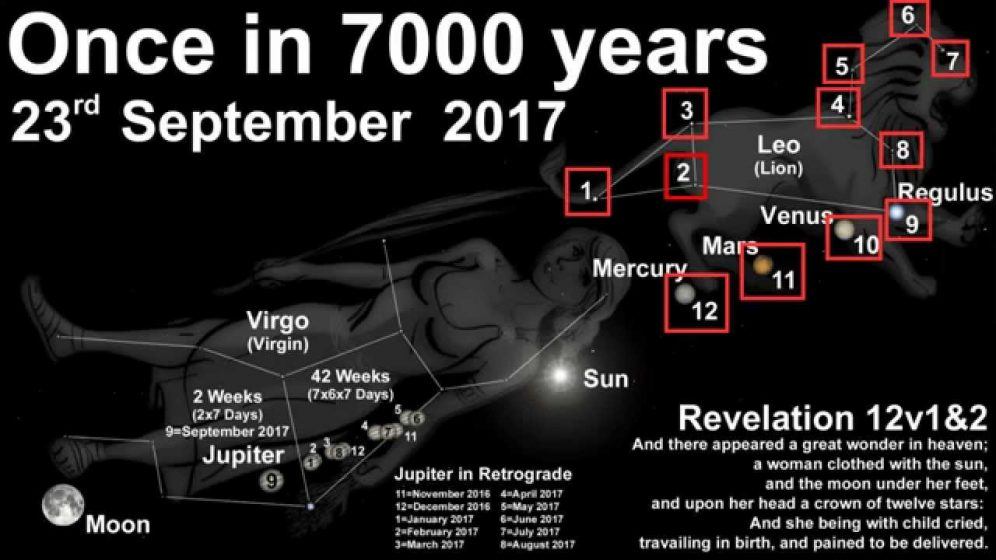 A great sign appeared in heaven: a woman clothed with the sun, and the moon under her feet, and on her head a crown of twelve stars; and she was with child; and she cried out, being in labor and in pain to give birth. Revelation 12:1,2

All eyes were on September of 2015 because of the end of the Shemitah and the four Blood Moons. That was fairly recent and I do not think it necessary to go into detail. I am sure that you remember all the hype. Nothing earth shattering happened on that particular day however, as many had expected. The night of the last Blood Moon, many were expecting something to happen that would shake the world. When nothing of that magnitude happened, many were disappointed.

So, did nothing happen at that time? No, something very prophetic happened. It was quiet. Many Christians picked up on it at the instant it happened but most never saw it at all.

“I have come in My Father’s name, yet you don’t accept Me. If someone else comes IN HIS OWN NAME, you will accept him.”

“IN HIS OWN NAME”

On September 28th, 2015, the largest group of Heads of State, ever assembled together in one place, in the history of the world, was at the United Nations in New York.

Pope Francis stood before that group and the world. In his opening remarks, the Pontiff said, “Thank you for your kind words. Once again, following a tradition by which I feel honored, the Secretary General of the United Nations has invited the Pope to address this distinguished assembly of nations. “IN MY OWN NAME…”

Time changed before that… So many people looked forward to December 2012.

“Sit silently, and go into darkness, O daughter of the Chaldeans, For you will no longer be called The queen of kingdoms…” Isaiah 47:5

We are in a season where Yellowstone has seen hundreds of earthquakes in just the last week. If it blows big, tens of millions could die, we could lose power in most of the nation, ash would cover the living and the dead, Hoover Dam could break, killing a million or more downstream and a huge canyon could divide us into East and west America.

Tensions have never been higher with North Korea and Russia. Syria is boiling, with Russian and American forces now face to face. Damascus has become a “pile of ruins.” Many nuclear nations seem poised to launch nukes in our direction. Rumors abound of Nuclear bombs sitting on the bottom, off both coasts. Bombs that can be set off by satellite or a distant submarine. Bombs that would produce radioactive tsunamis. Russian, Chinese, and even North Korean ships are often spotted off our coasts.

There is an interior threat from Islam and other demonized radicals. Hundreds of millions of dollars have been thrown at Black Lives Matter by Caucasian Jewish Billionaires, in the hopes that they will start a civil war that will bring us to our knees. Lucifer is determined to launch his New World Order. The United States is the last obstacle in his way.

Trump and his Son-in-Law, Jared Kushner, seem poised to sign a treaty with Israel, the Palestinians and the Pope that will facilitate the building of the Third Temple. Rabbis in Israel have openly identified our President as their Messiah.

All of these signs, and too many more to list, are happening in the 69th year of the Generation that Jesus said would not pass away before the end.

To the degree that she glorified herself and lived sensuously, to the same degree give her torment and mourning; for she says in her heart, ‘I sit as a queen and I am not a widow, and will never see mourning.’ For this reason in one day her plagues will come, pestilence and mourning and famine, and she will be burned up with fire; for the Lord God who judges her is strong. Revelation 18:7,8

THE KINGDOM OF THE BEAST WILL NOT SHARE POWER WITH THE UNITED STATES.

Whatever you believe about the United States today; whether you accept that we are the Babylon of End-Times-Prophecy or not, you must understand that we have come to the end of our days. The church is in wild and crazy apostasy, we serve other gods and offer the blood of more than a million babies a year to Baal-Moloch, our morals have sunk lower than those of Rome under Caligula, and the Kingdom of the Beast will not share power with the United States.

Face it, we deserve the Judgment of a Holy God. If God does not judge us, He will cease to be Righteous.

It is time to get right with God!

3 thoughts on “THE WEIGHT OF CONVERGENCE”